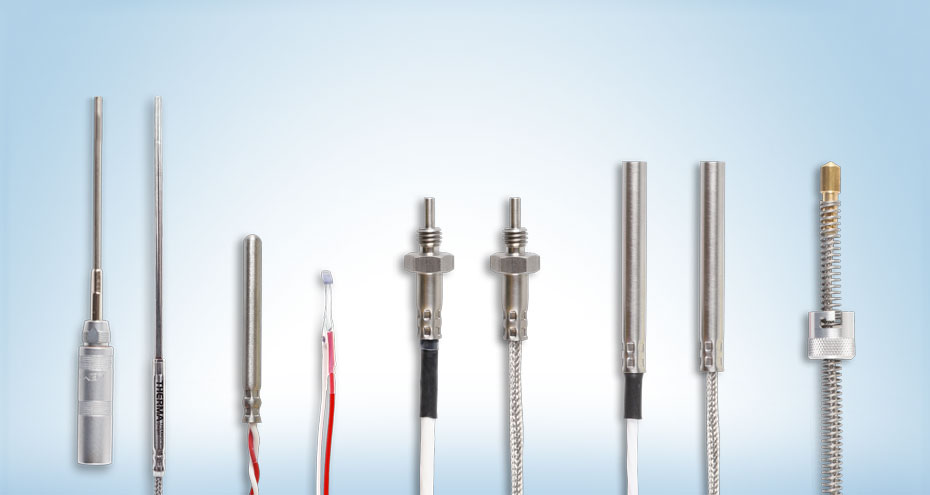 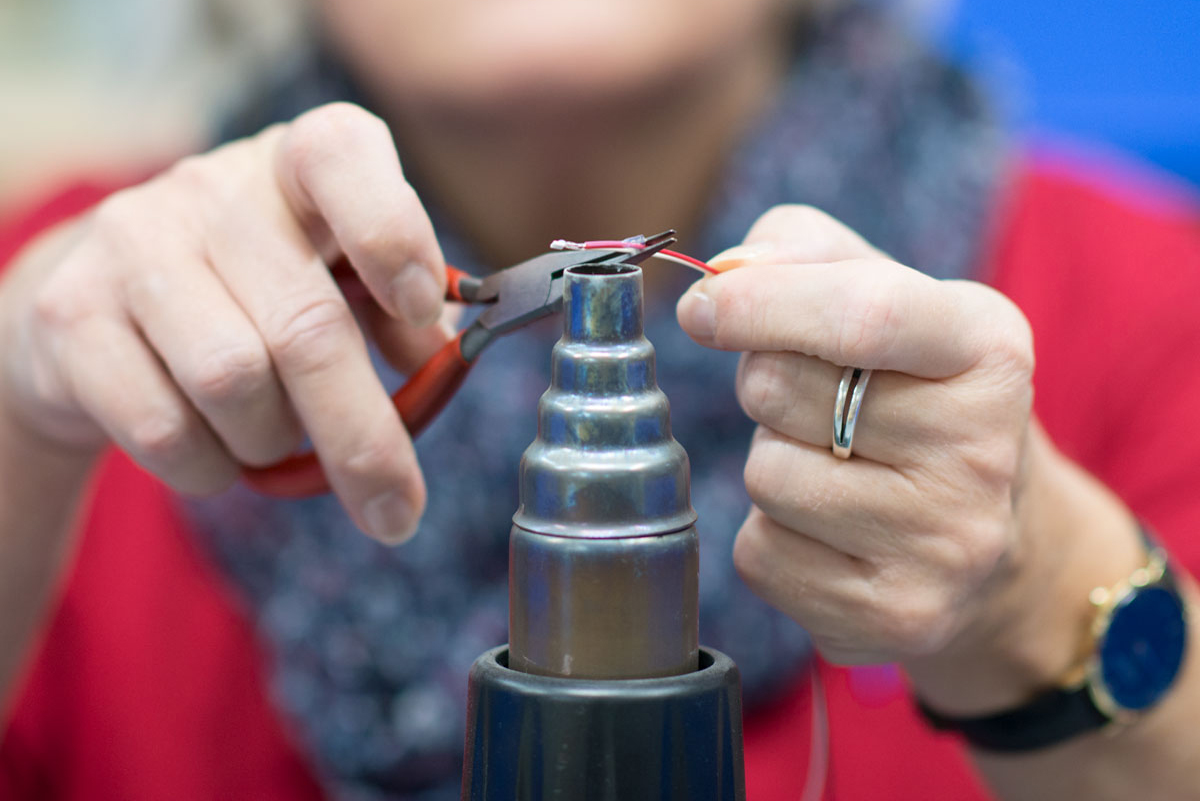 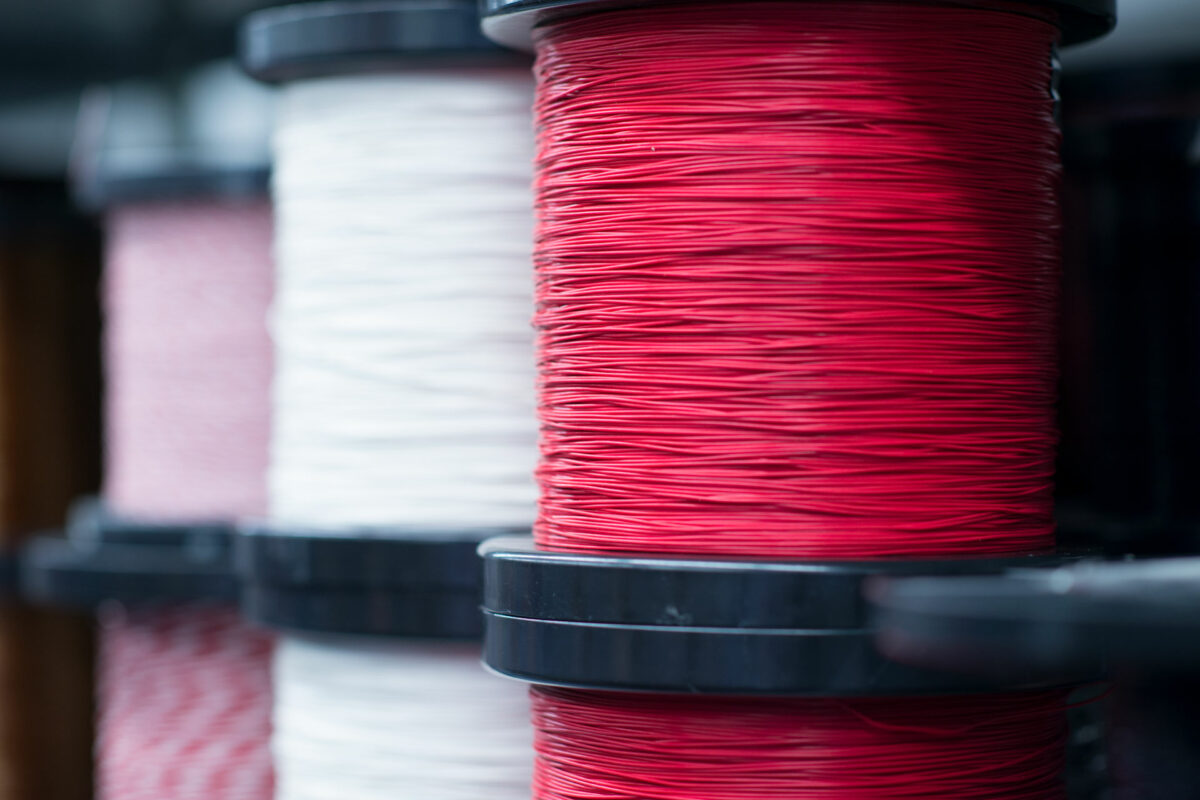 Temperature-dependent resistors measure the temperature using one or more built-in electrical resistors. We offer our customers a range of designs for the many possible applications they use. The basic resistance thermometers are distinguished into various types. Other key distinguishing features based on their physical properties are the sensor type, whether the resistor is made from metal or a semiconductor, and the connection type.

As is widely known, metals expand as they heat up. An electrical resistor does something similar. It also changes, depending on the temperature of the metal. This dependence is described by the temperature coefficient, which should be as large as possible. In other words, a temperature change causes a large change in the resistance. The pressure and temperature dependence of the coefficient should also be as low as possible, and uninfluenced by chemicals. Platinum in particular has proven itself especially useful in industrial applications for resistance thermometers, although nickel is also used.

Platinum has a positive temperature coefficient: its resistance increases as the temperature rises. Platinum can be produced with a high degree of purity and is resistant to chemical influences. The electrical properties are easily reproducible, making platinum resistance thermometers universally exchangeable. The baseline series for platinum resistors has been defined in accordance with the European standard IEC 60751 and ranges from -200 °C to 850 °C. The standard also defines the permissible limit value deviations. Platinum resistors are categorised according to their rated resistance (R0), which corresponds to the resistance value at 0 °C. A resistor with a rated value of 100 Ω at 0 °C is referred to as a Pt100 measuring resistor. Consequently, a Pt1000 measuring resistor has a rated value of 1000 Ω at 0 °C. The limit deviations for resistance thermometers are divided according to the IEC 60751:2008 standard into four classes. These apply for any R0 values and are distinguished according to wire-wound or sheet resistors. The most commonly used accuracy classes for resistance thermometers are AA, A and B. Class AA (previously known as 1/3B) defines the highest standardised accuracy for resistance thermometers. In special cases, a measuring resistor with a 1/5 or even 1/10 Class B can be installed.

These are used less frequently than platinum resistors since their range of use is only between -60 and +260 °C. Compared to platinum, nickel resistors have a higher temperature coefficient, which is why they are still popular. Like platinum resistors, they are also designated according to their rated value at 0 °C, e.g. Ni120.

These are also referred to as cold conductors since they have better electrical conductivity at low temperatures than they do at high ones.

These are also referred to as hot conductors since their electrical conductivity increases as they heat up. The resistance is highly non-linear and is specified as an R/R25 logarithm. A hot conductor is not chemically resistant.

Connecting wires are needed to connect resistance thermometers to a measuring device. Unlike thermowires and compensating wires, wires made from zinc-plated, nickel-plated or silver-plated copper or nickel wire are used. Nickel wires are only used for very high temperatures and are only available with fibreglass insulation. To make resistance thermometers as delicate as possible, preference is given to using connecting wires with a small diameter (≤ AWG 24). This does however lead to an increased wire resistance which can be compensated for with a three or four-wire circuit.

To avoid self-heating of the resistor, a very low current is selected. The voltage drop must be measured ideally with no distortion. There are various circuit types available for this. We produce our resistance thermometers with all possible circuit configurations, accommodating two, three or four-wire circuits.

An additional wire is connected to one of the arms of the measuring resistor and forms a second measuring circuit. This allows a measuring circuit to be used as reference and therefore the inherent resistance of the wire, as well as temperature-dependent fluctuations in the wire resistance, to be compensated. 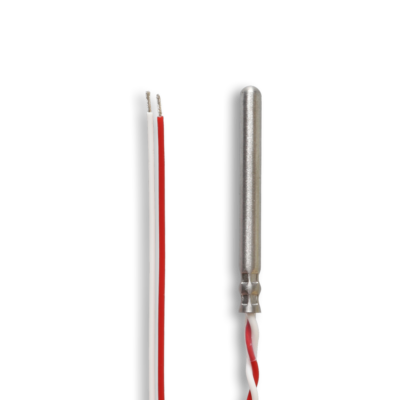 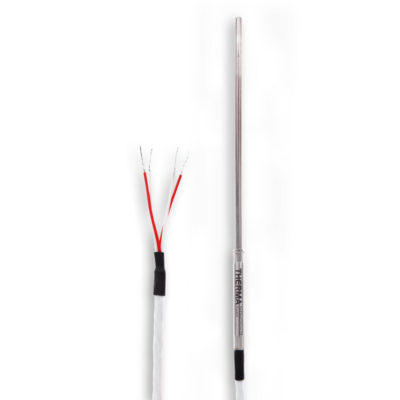 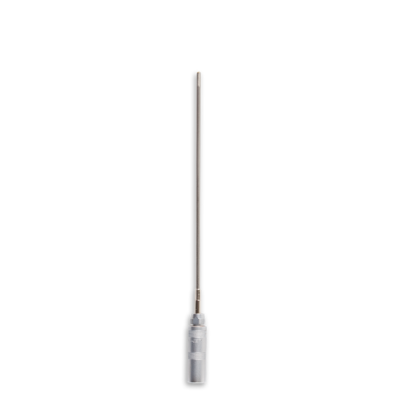 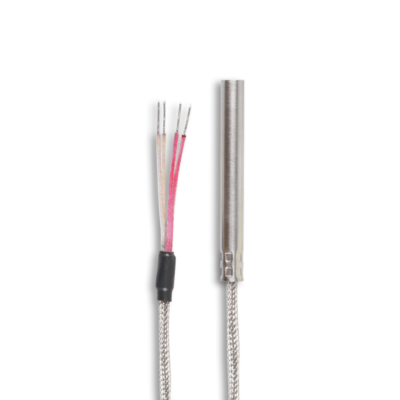 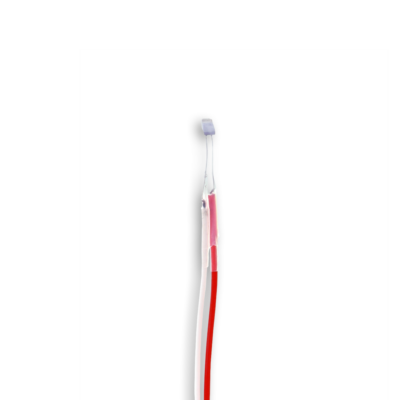 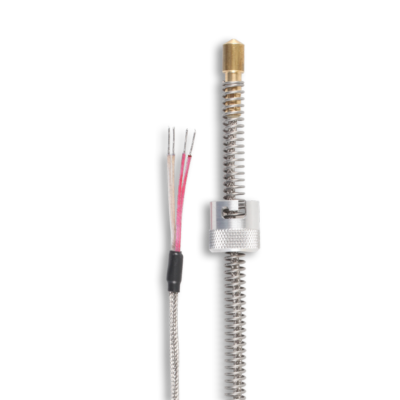 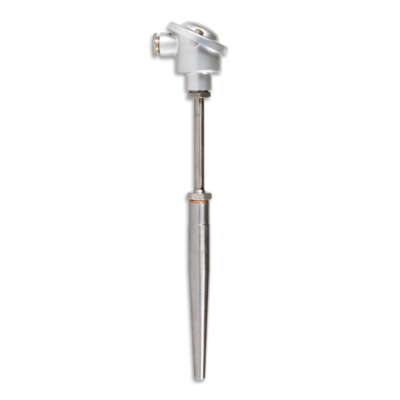 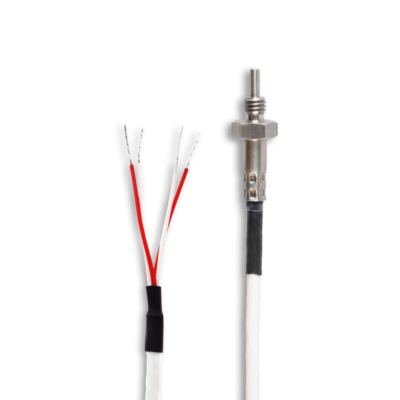 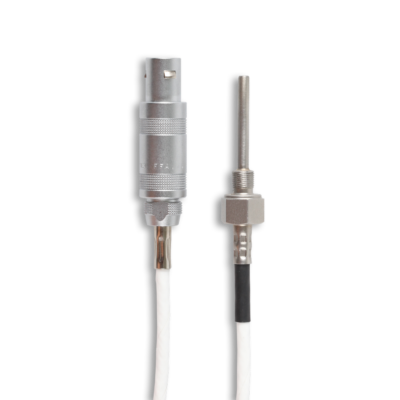 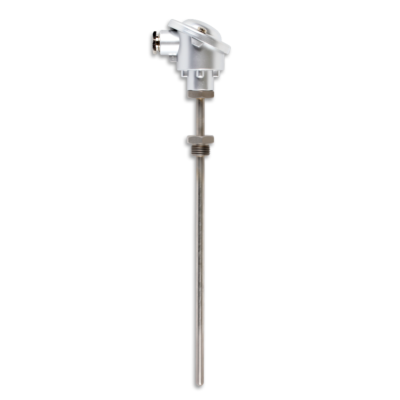 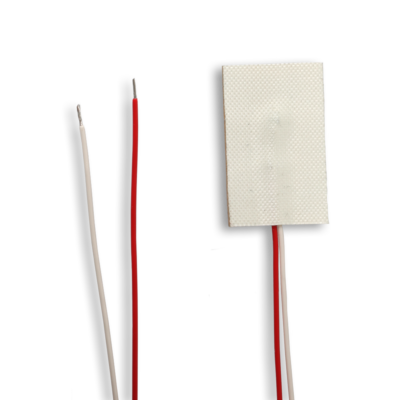 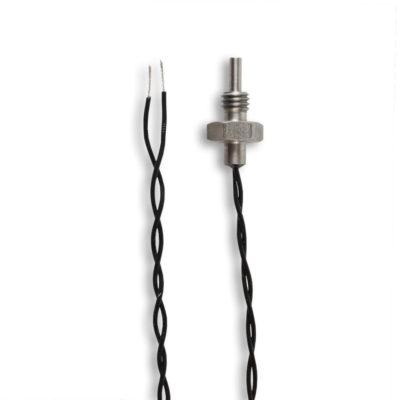 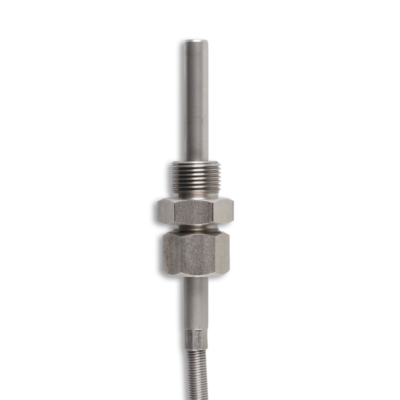 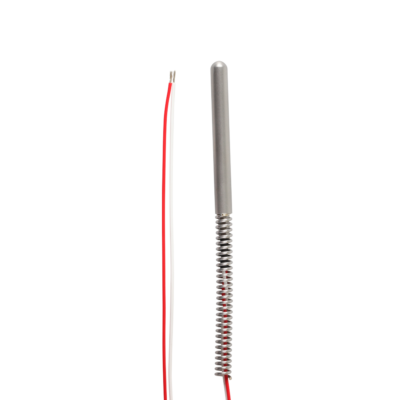 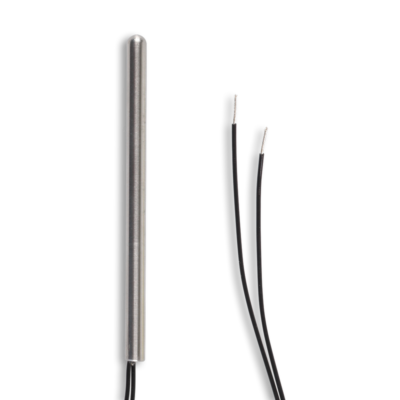 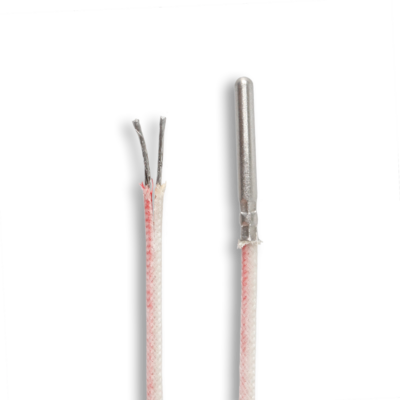 Industrial thermometers are sophisticated devices that can measure exact temperatures even under extreme conditions by calculating and using physical forces. We offer temperature sensors of all kinds, as well as accessories and would be happy to advise you on the products that are ideal for your requirements and working environment. We have a holistic understanding of temperature. We not only determine the right model for you from our extensive selection of high-performance temperature sensors, but can also offer the production of individual solutions for your laboratory or your development. Resistance thermometers are among the most sought-after temperature sensors, because the device can be adapted for a wide range of applications with only slight modifications to its design.

Every industrial thermometer must be connected to a measuring sensor. That is why you need connection cables that are just as stable and resistant to high temperatures and chemical influences as the resistance thermometer itself. Connection cables made of tinned, nickel-plated and silver-plated nickel or copper are most commonly used. The nickel conductors are best suited for high temperature ranges and also have glass fiber insulation. When designing a resistance thermometer, it is often important that it remains as filigree as possible. This is why connecting lines also have a small diameter and, due to the increased line resistance, often have to be compensated for with a three-wire circuit or four-wire circuit. In addition to fiberglass, Teflon or silicone is also used for insulation, depending on where the resistance thermometer is used. Teflon has a high resistance to acids, bases, oils, benzines and alcohols. However, the flexible material can only be used in a moderate temperature range and it is difficult to glue the insulation.

Resistance thermometers and their various types of connection

Ohm’s law, which determines the temperature-dependent resistance, is also important for an electrical resistance thermometer. A measuring current is introduced into the thermometer via the connection line and the voltage drop is then measured. To ensure that this measurement is as unadulterated as possible, the lowest possible current is selected, for example, in order to avoid self-heating. But the type of circuit is also closely related to a reliably and accurately measurable voltage drop. With the resistance thermometer, a distinction is made between two-wire circuit, three-wire circuit and four-wire circuit. The former type of switch often uses electronic correction of measurement deviations, as the result is always influenced by the internal resistance of the connection line. However, since this procedure involves additional effort and is not particularly flexible, additional lines are used for compensation in order to automatically produce the most accurate measurements possible using a resistance thermometer.

Do you need further information or an individual offer?
Your contact person Björn Hausberg & Benjamin Diepgrond